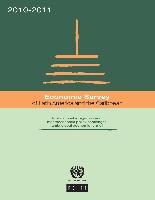 After contracting in 2009, GDP expanded by 5.9% in Latin America and the Caribbean in 2010, albeit with the region's hallmark differences in performance from one country to another. The expansion in output was driven by strong domestic demand in the forms of both consumption and investment, and by buoyant external demand. On the domestic demand side, private consumption (up 5.9%) was sustained by an upturn in employment and wages, brightening economic expectations, an expansion in lending to the private sector and, in some countries, an upswing in remittances from emigrant workers. Public consumption rose at a more modest rate of 3.9% and investment jumped by 14.5%, with strong growth in the machinery and equipment segments in particular. On the external demand side, exports of goods and services were especially buoyant —rising by over 10%— in the Southern Common Market (MERCOSUR) countries, the Dominican Republic, El Salvador, Mexico and Nicaragua. Meanwhile, imports of goods and services increased by more than 10% at constant prices on the back of robust domestic demand within the region, which rose 7.5%.For 2011, the Economic Commission for Latin America and the Caribbean (ECLAC) projects regional GDP growth of 4.7%, or 3.6% in per capita GDP, as the recovery that began in the Latin American and Caribbean economies in the second half of 2009 firms up. The slippage in this rate compared with 2010 may be attributed to loss of momentum in the international economy and, in some cases, the gradual withdrawal of public policy stimulus implemented to deal with the fallout from the crisis. For 2012, regional growth is projected at 4.1%, equivalent to a rise of 3.0% in per capita GDP, notwithstanding the downturn in external conditions and, on the domestic front, complex policy challenges arising from dilemmas over the direction of certain macroeconomic variables.In the near term, activity levels in the economies of Latin America and the Caribbean are being sustained largely by private consumption, thanks to an improvement in labour indicators and an expansion in lending. At the same time, expectations of buoyant domestic demand and the depletion of idle production capacity, combined with more readily available credit, are fuelling investment. The unemployment rate is projected to fall again in 2011, to between 6.7% and 7.0% —below pre-crisis levels— as continued growth boosts the employment generation capacity of the region's economies. Indicators show formal wage employment rising as a proportion of total employment in several countries, suggesting that the new jobs being created are of better quality. This setting of economic growth and jobs rising in both numbers and quality could herald fresh gains in poverty reduction.Amid burgeoning domestic demand, rising prices for commodities, especially food and fuels, are exerting upward pressure on the inflation rate. The region's central banks are once again facing a dilemma in this respect. On the one hand, they need to maintain price stability. On the other, they must try to keep their export sectors (or those producing import-substitution goods) competitive amid heavy upward pressure on the region's exchange rates. Currency appreciation is being driven by a combination of highly liquid external conditions, the solidity of some Latin American economies and, in several cases, massive inflows of foreign exchange resulting from high export commodity prices and foreign investors' renewed appetite for emerging country assets.These circumstances present a number of risks and difficulties, both in the short term and in the medium and longer terms. First, the increase in financial inflows makes the region more vulnerable to speculative capital movements, a further risk being that the sheer magnitude of the resources involved could exceed the capacity of the financial systems to manage them and lead to financial asset or realestate bubbles. Over a longer period, real exchange-rate appreciation could erode the external component of demand for goods, especially if world trade loses momentum, as it may if growth in the developed countries slackens as mid-2011 projections suggest it will. The combination of real exchange-rate appreciation and rising commodity prices could push the region further towards intensive specialization in the production and export of primary goods, thus leaving its economies more open to external shocks and possibly fuelling macroeconomic volatility. This would certainly hurt the economies' capacity to grow, generate productive employment and reduce inequality.These risks may not be imminent, yet there are grounds for caution. Advantage should be taken of the current favourable conditions to strengthen the region's external position and generate public sector savings in order to recover the policy space used up during the crisis. Measures such as short-term capital controls could also help to limit vulnerability. These recommendations are, moreover, compatible with efforts to contain currency appreciation. Recouping fiscal space is therefore vital for the countries of the region. It would help them to face not only the classic public policy challenges (the need for greater investment in physical and social capital) but also those arising from developments on the international front. More substantial public sector savings would allow governments to steer clearer of contractionary monetary policy and would help to reduce the tension between strategies to counter inflation and those to contain currency appreciation. The second part of this report looks at the challenges thrown up in the context of high commodity prices and abundant liquidity flowing towards Latin American assets. The Latin American and Caribbean countries in this situation have the opportunity to use these resources to foster long-term growth, but must at the same time deal with greater inflationary pressures, loss of competitiveness through currency appreciation and the threat of reprimarization" —a shift back towards primary production— of their productive apparatus.Although the governments of the region may draw upon a range of tools to contain the negative implications of this international setting, these all have a cost, are not guaranteed to work and may cause unwanted side effects. The challenge for policymakers, then, is to craft the right mix of tools for each country's specific pattern of trade and financial engagement and to create an enabling environment for investment, employment and the greater well-being of the population at large."