Economic Survey of Latin America and the Caribbean 2007-2008: Macroeconomic policy and volatility 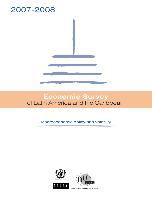 This 2007-2008 edition of the Economic Survey of Latin America and the Caribbean comes 60 years after the first session of ECLAC, when the Executive Secretary of the Commission was mandated by the United Nations Economic and Social Council and the countries attending the session to undertake "the collection, evaluation and dissemination of [...] economic, technological and statistical information" on the region with a view to preparing "an economic survey of Latin America". The first report drawn up in fulfillment of that mandate was seen as a first step in what was already recognized as a long and arduous task: that of producing a comprehensive, well-documented analysis of the economic situation in the region.

That formidable task was to become an ongoing one. Indeed, throughout the past sixty years, the Economic Survey has embodied the Commission's perspective on the main economic problems and trends observed in the countries in the region in order to strengthen the capacity of Governments to tackle these issues and, according to the situation in each economy, to draw up a development strategy and adopt policies designed to ensure a steady rise in living standards for the entire population. Thus, the Economic Survey has been a constant witness of economic development in general and, in particular, of the growth of a region as rich, complex and diverse as Latin America and the Caribbean with all its unique and distinctive features.

This flagship publication of ECLAC has thus become the principal source of information and analysis relating to the economic situation in the region and one of the documents most frequently consulted and cited by stakeholders, government authorities and experts. As such, it has helped to shape thinking on the challenges to development from the Latin American and Caribbean viewpoint.

The format of this publication has evolved in response to new ideas and problems, technological progress and the growing availability of figures and statistics. Starting with the previous Edition (No. 59), the analysis of economic trends in the region has been supplemented with a series of thematic chapters which examine in depth certain issues of particular importance for short-term policies as well as factors affecting long-term growth.

Chapter I of the present edition, entitled "Regional overview", which follows the executive summary, surveys the main determinants of the region's economic development in 2007 and the first half of 2008 as well as the impact on the region of recent events in world markets. This chapter is supplemented with a statistical appendix, presented at the end of the document.

The next three chapters examine the nature of volatility in output growth and the countercyclical measures adopted by countries in the region. Chapter II, entitled "Macroeconomic volatility and how it affects Latin America and the Caribbean", considers the adverse effects of volatility on long-term growth and in other key areas such as financial development and investment, income distribution and poverty. Chapter III, entitled "Volatility and crisis in Latin America and the Caribbean: the empirical evidence", describes the analytical framework used to identify periods of growth and decline in economic activity and to quantify trends in gross domestic product (GDP) and their causes. "Volatility, the economic cycle and policy response", the topic of Chapter IV, is examined with emphasis on fiscal policy, whose variability is yet another factor in the region's sluggish growth. The conclusion to this chapter considers three points that shed light on the constraints faced by the countries of the region in implementing countercyclical policies: policy coordination problems, constraints arising from the political economy of public spending and taxation and, lastly, the income-distribution implications of economic shocks.

Chapter V, entitled "Sixty years of the Economic Survey", has been especially prepared to mark the anniversary of this publication. It reviews the Economic Survey's sixty years of existence and the main challenges to the region's development it has analysed. The economic climate that prevailed in each of the periods examined is described in the light of the dominant historical trends of the time (see fact sheet enclosed).

Lastly, the individual performance of each economy in 2007 and in the first half of 2008 is analysed in the country notes which, as in preceding editions, include tables setting out the main economic indicators.

Economic Survey of Latin America and the...
The repercussions of the crisis on the countries...
Preliminary Overview of the Economies of Latin...
A preliminary assessment of the policies...