Home » Events » Support to the implementation of vehicle regulation standards in Latin America and the Caribbean - II
Available in: EnglishEspañol

In Latin America and the Caribbean, the road accident death rate per 100,000 inhabitants is 19.2, well above the rates in other regions such as Europe (9.3) and North America (10.2). Road accidents are the leading cause of death in children between the ages of 5 and 14, and the second leading cause of death in young people aged 15 to 29 years.[1] Given the magnitude of social and economic costs due to the lack of road safety in the region, the Inter-American Development Bank’s Bien Público Regional (Regional Public Good, RPG) emerged as a concrete project within the broader framework of international efforts to guide and support countries in road accident prevention and contaminant emission reduction through vehicle regulation. The United Nations Economic Commission for Latin America and the Caribbean (ECLAC), Latin NCAP and the University of Chicago are collaborators in this effort.

In concrete terms, the RPG aims to support the countries of Latin America and the Caribbean, especially those that have subscribed to the RPG (Argentina, Brazil, Colombia, Ecuador, Mexico and Uruguay), to consider subscribing to the regulations of the United Nations World Forum for the Harmonization of Vehicle Regulation (WP.29) and review the implications of the regulations’ adoption. The project encompasses the development of three major studies and two high-level dialogues in order to generate exchange and reflection regarding regulations, as well as to offer objective and technically sound arguments to support public policy decisions in the region for the adoption of UN regulations developed by the WP.29.

The first instance of dialogue organized as part of the RPG was the First Regional Workshop held on August 29-30, 2018 in Mexico City. It was attended by 48 participants representing 15 countries in the region and 4 institutions that are part of the RPG research and coordination teams. The Workshop consisted of two days of presentations and dynamic work sessions to contextualize the importance of road safety for the region, offering a holistic view of the methodologies and preliminary research results, and generating spaces of practical reflection to obtain feedback from participating countries.

Upon concluding the second day of the Workshop, each participant received a USB stick containing: (i) all Workshop presentations, (ii) UN WP.29 regulations proposed to governments, in English and Spanish, and (iii) a set of pertinent IADB publications so that participants may use and share the approaches and debates that took place during the Workshop in their respective countries and institutions. This information is expected to be useful in promoting reflection and exchanges between key actors in preparation for the Second RPG Regional Workshop, which will be held on November 7-8, 2018 in the city of Bogota.

A list of Workshop participants follows, along with the program, and a summary of key points that arose during work sessions: 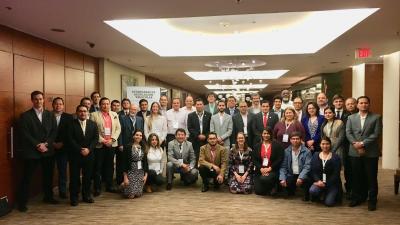