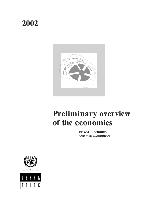 This document contains an analysis of and statistics on the economic performance of the region as a whole and of individual Latin American and Caribbean countries in 2002. It shows a 0.5% decline in regional economic activity, leading to a fall in per capita gross domestic product below 1997 levels and thus completing half a lost decade" for the region as a whole. South American economies, particularly Argentina, Uruguay and Venezuela, weighed heavily in the regional aggregate, but the lack of dynamism was widespread throughout the region. An adverse external environment was key to explain this poor performance. First, worsening financial conditions particularly affected Mercosur countries and resulted in a negative net transfer of financial resources from the region, amounting to some US$39 billion. Second, a lackluster world economy accounted for the weakness of regional exports and for a continuing deterioration in the region's terms of trade. Third, the deep crisis affecting Argentina hit bottom in 2002. The Preliminary Overview is prepared every year by ECLAC's Economic Development Division in collaboration with the Statistics and Economic Projections Division, the ECLAC sub-regional offices in Mexico City and Port-of-Spain, and the ECLAC national offices in Bogota, Brasilia and Buenos Aires. It draws on statistical material provided by central banks and statistical offices of the countries in the region."