Poverty, hunger and food security in Central America and Panama 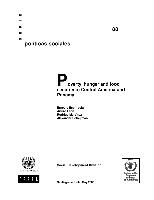 Food insecurity and hunger are closely associated with extreme poverty in Latin America and the Caribbean, but they should not be confused with it. A diet which is insufficient for leading a normal life and is also inadequate from a nutritional point of view affects not only those living in conditions of extreme poverty but also broader sectors and groups living in particular areas or regions of each country. Among the forms of deprivation affecting those living in a state of extreme poverty, however, the lack of access to food is the most serious problem and that which it is most urgent to eradicate. The importance of doing away with the most extreme hunger situations is reflected in the fact that the first development goal of the Millennium Declaration is the eradication of hunger from our planet, which is made the subject of specific targets and is given the same priority as the alleviation of poverty.
Child undernutrition is the most serious manifestation of the ongoing lack of foodstuffs of sufficient quantity and quality to meet the energy needs of the whole population. Of the two forms which this undernutrition takes -low weight and low height for age- the retardation of growth is particularly serious in the countries of the region, both because of its high level of incidence and its irreversible ill-effects on the development of individuals and society.
Since the International Conference on Nutrition (Rome, 1992); and the World Food Summit (Rome, 1996);, concern over food security and hunger has been displayed more and more clearly in the formulation of national food and nutritional security policies.
In the Central American countries, various types of action have been taken in support of these initiatives, including in particular the establishment in 1991 of the Council of Central American Ministers of Health (COMISCA); and the Regional Commission on Social Affairs (CRAS);; the Social Integration Subsystem of the Central American Integration System (SISCA/SICA);, which was set up in 1993; the Fourteenth Summit Meeting of Central American Presidents (Guatemala, 1993);, which ratified the Regional Food and Nutritional Security Initiative (SAN); promoted by the Central American and Panamanian Nutritional Institute (INCAP/PAHO);; the 1996 World Food Summit, at which the countries of the region pledged "... our political will and our common and national commitment to achieving food security for all and to an ongoing effort to eradicate hunger in all countries, with an immediate view to reducing the number of undernourished people to half their present level no later than 2015."; and the mandates of the Twenty-second Iberoamerican Presidential Summit in December 2002, which include the adoption of a Strategic Framework prepared by the Central American Agricultural Council (CAC); to cope with the situation of food and nutritional insecurity associated with the prevailing conditions of drought and climate change.
The main challenge has been to secure the assignment of high priority to food security on national policy agendas. The questions that this document seeks to address are to what extent the objectives aimed at relieving hunger are being attained and the causes and particular consequences of this phenomenon in the Central American countries.
In order to find the answers to these questions, in early 2003 the Regional Office of the World Food Programme (WFP); and the Economic Commission for Latin America and the Caribbean (ECLAC); signed a three-year cooperation agreement which includes the preparation of a special chapter on hunger, undernutrition and poverty for the Social Panorama of Latin America, 2002-2003, as well as three annual reports analyzing this matter for groups of countries. Because of the seriousness of the problem, the first country group dealt with consists of the Central American countries and Panama.