Prevention and insurance of conflict and terrorism: issues and evidence for Latin America 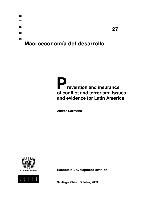 Prevention and insurance of conflict and terrorism: issues and evidence for Latin America

Latin America has a long history of political violence that include civil wars; guerrilla movements, military intervention, coup d'état, terrorism and others form of violent confrontation. As conflict and terrorism (C-T) produces losses of human lives and destroy assets and property there is an obvious need for prevention and insurance against this kind of risk. Insurance can be provided by both the state and by the market. In countries subject to long and violent conflict there is need for direct provision of insurance and compensation to the victims of conflict and their families. However, also private insurance for C-T risks can be developed. The development of market insurance for these contingencies require adequate pricing, a solid financial base of insurance companies and mechanisms for shifting risk particularly when we are in presence of extreme events" that increase, substantially, the solvency risk of insurers. The losses of terrorist attacks are sometimes very large (over $ 50 billions associated with the attacks on the twin towers on September 11, 2001, in New York City). The "extreme event syndrome' calls for some degree of state intervention to secure the solvency of insurance market institutions in the wake of large contingencies. Efficient public intervention requires an adequate understanding of issues of incentive-compatibility, moral hazard and risk diversification that are central in the theory and practice of insurance mechanisms."