Antidumping and the global financial crisis: the impact on Latin America and the Caribbean 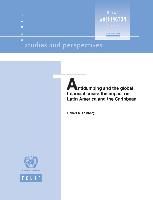 Antidumping and the global financial crisis: the impact on Latin America and the Caribbean

Global antidumping activity peaked in 2001, with 366 petitions initiated world-wide, and rapidly diminished to just 163 cases in 2007. With the onset of the current major world-wide recession some observers feared that antidumping usage would climb dramatically; however while antidumping activity was up by 28% in 2008 (to 208 cases initiated, according to WTO statistics), the rise was not nearly commensurate with the financial distress, and new antidumping initiations for the first three quarters of 2009 -at 154 cases- are on pace to show little change for the full year compared to the previous one (based on data from Bown's Global Antidumping Database). However, antidumping has largely become a problem of the developing world, both in terms of major importing country users (e.g., the three largest users in 2008 were India, Brazil, and Turkey, the three largest users in 2009 so far have been Pakistan, India, and Argentina), and of targets (with China by far the largest exporting country hit by antidumping petitions, but Thailand, Taiwan and Indonesia the next largest targets of cases filed in 2008).