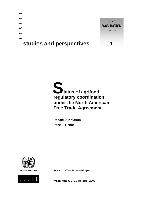 Since its initiation on January 1, 1994, the agriculture section of the North American Free Trade Agreement (NAFTA) has been controversial, which has led to several trade disputes, suggestions for modification and strengthening, and even Presidential initiatives such as the Security and Prosperity Partnership of North America (SPP). While NAFTA has done much to spur economic growth and development, it has not realized its potential in integrating agrifood markets. Several illustrations are summarized in this report on progress in overcoming sanitary and phytosanitary (SPS) barriers to trade under NAFTA; much remains to be accomplished. The basic problem is the NAFTA agreement itself, which lacks a strong NAFTA Secretariat that is charged with moving the NAFTA agrifood economic and market integration agenda forward. While this could best be accomplished by modifying the NAFTA agreement to form an EU Commission type body, without authorization for a common market or an economic union, this option is not politically feasible in an environment where anti-free trade advocates are prevalent.