Potential output in Latin America: a standard approach for the 1950-2002 period 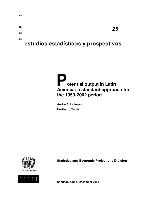 Potential output in Latin America: a standard approach for the 1950-2002 period

(*) This document was prepared by André A. Hofman of the Economic Projections Center of the Statistics Division, and Heriberto Tapia research assistant in the office of the Executive Secretary of ECLAC. The views expressed in this document, which has been reproduced without formal editing, are those of the authors and do not necessarily reflect the views of the Organization.. Abstract Potential output estimates are becoming increasingly important in policy design in Latin America (ECLAC, 2002) and the objective of this paper is to make a methodological contribution to this field of work. For a proper evaluation of the macroeconomic situation in a certain point in time it is important to have an idea of the level of potential output. For monetary policy decisions it is important to know what the level of potential output is compared to the effective output. In an era in which inflation targeting has become widespread in Latin America it has become increasingly important to estimate potential output. In projections of economic growth the output gap can be a very important input. Estimates of potential output are of course only one of many indicators to be used in macroeconomic policy evaluation. In most developed countries an array of measures about the economic cycle are used among which the most important are measures of capacity use, delivery lags and the NAIRU (non-accelerating inflationary rate of unemployment) and direct measures of inflation. In the evaluation of the macroeconomic situation additional elements that might affect the economy (terms of trade, external situation) must be taken into consideration the whole complex environment of the economy internal and external. The work on economic growth has experienced a rapid expansion in the last few decades. Interesting new ideas have been developed and older somewhat forgotten ones have come to the focus of attention again. The growth performance of nations shows a great variety in results and these differences can be explained, among other causes, by differences in accumulation of production factors and multi factor productivity on one level and institutional factors and the international context on an other. In the context of these new approaches in the analysis of economic growth concepts like catching-up and potential growth are becoming increasingly important. In estimating potential output two approaches can be distinguished. In the first one a variety of statistical detrending techniques are applied, in our case using the Hodrick-Prescott filter, and in the second approach the output gap is estimated on the basis of structural relationships. The Hodrick-Prescott filter defines a "trend" output. The second part on production functions indicate more towards a concept of production frontier or the maximum possible production given certain factors. The paper estimates potential output in a group of nine countries in Latin America: Argentina, Bolivia, Brazil, Chile, Colombia, Costa Rica, Mexico, Peru and Venezuela. These countries cover around 80% of the Latin American territory and about 90% of its GDP. A new aspect of our estimates is that they introduce the concept of structural change in the production function. Contents: - Methodology -- Estimating trends -- Estimating production functions - Results - Conclusions - References - Annexes: Country cases""