Public-private partnerships under the “people-first” approach 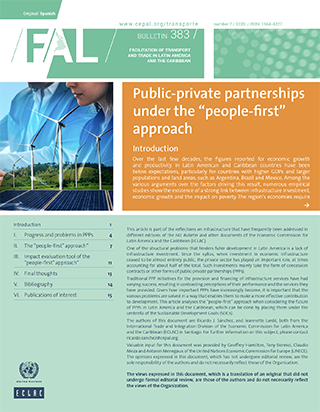 Public-private partnerships under the “people-first” approach

One of the structural problems that hinders fuller development in Latin America is a lack of infrastructure investment. Since the 1980s, when investment in economic infrastructure ceased to be almost entirely public, the private sector has played an important role, at times accounting for about half of the total. Such investments mainly take the form of concession contracts or other forms of public-private partnerships (PPPs).

Traditional PPP initiatives for the provision and financing of infrastructure services have had varying success, resulting in contrasting perceptions of their performance and the services they have provided. Given how important PPPs have increasingly become, it is important that the various problems are solved in a way that enables them to make a more effective contribution to development. This article analyses the “people-first” approach when considering the future of PPPs in Latin America and the Caribbean, which can can be done by placing them under the umbrella of the Sustainable Development Goals (SDGs).