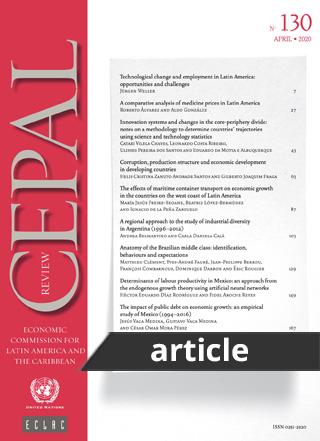 This article seeks to identify and analyse the pattern of specialization in the export structure of North-East Brazil in 2003–2014, following the expansion of international trade with the BRICS countries (Brazil, Russian Federation, India, China and South Africa). The Aliceweb and Trademap databases are used to calculate the relevant indicators, namely the specialization coefficient, revealed comparative advantage, contribution to the trade balance, and degree of intraindustry trade. Trade with the BRICS countries led to exports being reorganized by specialization groups, thereby confirming a historical trend of comparative advantage in exports in the following product categories: food, tobacco and beverages; paper and pulp; chemicals; plastics and rubber; textiles; footwear and leather. Trade with the BRICS countries did not promote diversification or increase the technology content of the North-East’s export structure.