Capital Flows to Latin America and the Caribbean: 2019 Year-in-Review 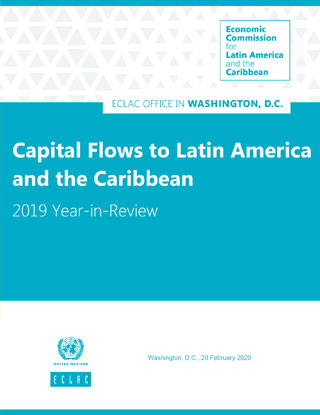 Capital Flows to Latin America and the Caribbean: 2019 Year-in-Review

These are the main highlights of the Capital Flows to Latin America 2019 Year-in-Review edition:
• In 2019, international bond issuance from Latin America and the Caribbean (LAC) increased and bond spreads tightened, but credit quality continued to deteriorate although at a slower pace relative to 2018.
• Lowering global interest rates brought issuance volume up in the region. Total LAC debt issuance in international markets in 2019 was US$ 119 billion, 26% higher than in 2018.
• Mexican, Brazilian and Chilean borrowers were the main contributors to the region’s performance. Together they were the three top issuers (sovereign and corporate issuance combined) and accounted for 64% of the total LAC bond issuance in 2019. Mexican borrowers increased issuance by 40% relative to 2018, Brazilian by 54% and Chilean by 46%. They accounted for 28%, 25% and 11% of the total, respectively.
• In 2019, Latin American stocks and debt spreads recovered from the rout caused by the increase in volatility and risk perception in global markets in the second half of 2018. The JPMorgan EMBIG Latin component tightened 222 basis points (compared to a widening of 149 basis points in 2018), while Latin American stocks gained 14% according to the MSCI Latin American index (compared to a loss of 9% in 2018).
• On balance, credit quality deteriorated in 2019. There were eleven credit rating upgrades and twelve downgrades in 2019. When looking at all credit rating actions, including outlook revisions, there were eighteen positive and twenty-two negative actions. Negative credit rating actions (including downgrades and downward outlook revisions) have outnumbered positive actions in the region for seven years in a row, but the imbalance improved in 2019. There were four more negative actions than positive in the region in 2019, compared to fifteen more in 2018.
• Finally, there was a recovery in green bond issuances from the region in international markets. In 2019, LAC international green bond issuances amounted to US$ 5.45 billion, which represented 4.6% of the region’s total international bond issuance. In June, Chile became the first sovereign in the region to issue green bonds.