People of African descent in Latin America and the Caribbean: Developing indicators to measure and counter inequalities 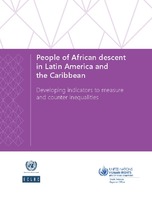 People of African descent in Latin America and the Caribbean: Developing indicators to measure and counter inequalities

People of African descent have become active political and social actors during this century. They have managed to put their historical claims and revindications on public agendas, creating new State obligations to guarantee their fundamental rights and achieve greater levels of equality. There is therefore an urgent need to end the statistical invisibility of populations of African descent, which is an example of structural racism. Information is thus a fundamental tool for policies and for actions undertaken by Afrodescendent organizations, as well as for monitoring regional and international agreements.

Within this context, this publication contains a set of indicators, the purpose of which is to measure ethnic and racial inequalities and gaps between Afrodescendent and non-Afrodescendent populations in line with international and regional commitments. Accordingly, the proposal has been formulated on the basis of the Sustainable Development Goals, the Programme of activities for the implementation of the International Decade for People of African Descent and the Montevideo Consensus on Population and Development.