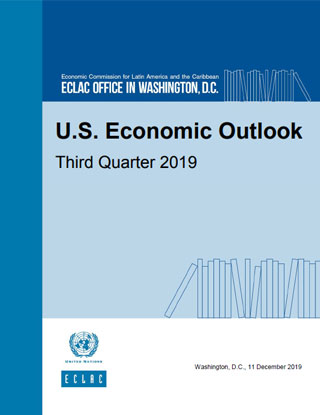 Highlights
• In the third quarter of 2019, the U.S. economy grew at a 2.1% annualized rate. Growth was driven by consumer and government spending, and a buildup in inventories.
• The third quarter of 2019 was the 41st consecutive quarter of growth and November the 125th month of consecutive growth for the U.S. economy. The current expansion is the longest on record.
• The Federal Open Market Committee (FOMC) cut the federal funds rate three times this year, in July, September and October, due to slowing global growth and trade uncertainty, contributing to diminish recession fears. Federal Reserve Chairman Jerome Powell has announced a “wait-and-see” posture for future changes in monetary policy.
• The nominal trade deficit narrowed by 7.6% in October to US$ 47.2 billion. It has narrowed in four of the past five months and is the narrowest since the first half of 2018. It is expected to make a positive contribution to growth in the fourth-quarter.
• U.S. employers added 266,000 jobs in November, beating expectations and confirming the continued strength of the labor market. The unemployment rate dropped back to a historic low of 3.5%, and hourly earnings increased 3.1% over the past year, also exceeding estimates.
• In November, U.S. consumer price inflation edged up (0.3%) following another rise in October (0.4%). Over the last 12 months, the all items Consumer Price Index (CPI) rose 2.1%. The core CPI was up 2.3%.