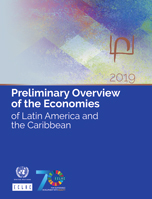 This edition of the Preliminary Overview of the Economies of Latin America and the Caribbean is released amid an extremely complex economic and social context for the region. Latin America is showing a synchronized economic slowdown at the country and sector levels. In contrast to previous years, in 2019 growth in economic activity is slowing in 18 of the 20 countries of Latin America, and in 23 of the 33 countries of the Latin American and Caribbean region as a whole. The slackening of domestic demand has been accompanied by low aggregate external demand and more fragile international financial markets. Added to this scenario are the growing social demands and pressures to reduce inequality and improve social inclusion, which have emerged unusually forcefully in certain countries of the region.
The macroeconomic panorama of the last six years (2014–2019) shows a tendency towards slowing economic activity, with falls in per capita GDP, investment, per capita consumption and exports, and a sustained decline in the quality of employment. In these circumstances, the economies of Latin America and the Caribbean are set to grow at an average rate of 0.1% in 2019. Although the growth projections for 2020 show an improvement with respect to 2019, they remain subdued, with the countries expected to grow at an average rate of 1.3%.
If this projection is borne out, the seven years from 2014 to 2020 will have been the slowest economic growth period in 40 years. This comes in a global context of low growth and increasing vulnerability, with no significant positive catalysts expected. Coordinated, expansionary domestic economic policies are therefore needed to boost countries’ growth. The main economic policy challenge is preventing the region from falling into economic and social stagnation, while maintaining progress on macrofinancial stability and debt sustainability.
Despite the constraints on policy space today, most countries in the region —unlike in earlier periods— have historically low inflation and relatively large international reserves. Furthermore, most can still draw on international financial markets, amid historically low international interest rates. These conditions are amenable to the implementation of macroeconomic policies to stimulate aggregate demand.