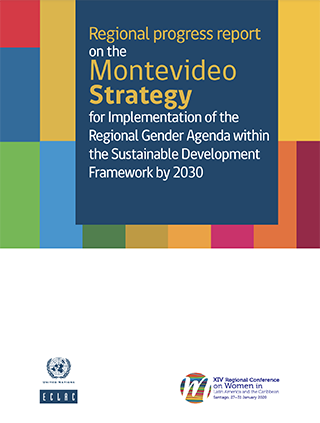 The countries of Latin America and the Caribbean have made great strides towards achieving gender equality and women’s autonomy in recent years, especially on the regulatory and institutional fronts. However, although progress is undeniable and all the countries have rolled out initiatives relating to these themes, gender inequalities remain a structural feature of the region and there are still significant obstacles to the achievement of substantive equality.
Given the persistence of inequality and its strong link with the unsustainable prevailing development pattern, ECLAC has worked with Latin American and Caribbean governments to help them overcome conceptual and public policy challenges that frustrate sustainable development based on gender equality and women’s autonomy. As part of this process, the region’s governments have identified four structural challenges that are entrenched in unequal power relations, as outlined in the Montevideo Strategy for Implementation of the Regional Gender Agenda within the Sustainable Development Framework by 2030: socioeconomic inequality and the persistence of poverty in the framework of exclusionary growth; (ii) discriminatory, violent and patriarchal cultural patterns and the predominance of a culture of privilege; the sexual division of labour and the unfair social organization of care; and the concentration of power and hierarchical relations in the public sphere.
These bottlenecks are the product of a combination of external factors and endogenous features that are inherent in the socioeconomic and cultural structures of the countries of Latin America and the Caribbean. As they are mutually reinforcing and generate complex socioeconomic, cultural and belief systems, they hinder and reduce the scope of policies on gender equality and women’s autonomy, and must be addressed in order to achieve substantive equality in the region. The Montevideo Strategy explicitly proposes the breakdown of these structural obstacles to gender equality.

Introduction .-- I. Structural challenges of gender inequality in Latin America and the Caribbean .-- II. The Montevideo Strategy’s contribution to the design and implementation
of equality policies in the region .-- III. Current challenges and prospects for gender equality by 2030.

Regional Conference on Women in Latin America and the Caribbean