The transformation of the North American apparel industry: is NAFTA a curse or a blessing? 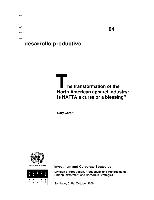 The transformation of the North American apparel industry: is NAFTA a curse or a blessing?

Abstract The article uses the global commodity chains framework to explain the transformations in production, trade and corporate strategies that altered the global apparel industry over the past decades and changed the conditions for industrial upgrading. The apparel industry is identified as a buyer-driven commodity chain that contains three types of lead firms: retailers, marketers and branded manufacturers. As apparel production has become globally dispersed and competition between these firms has intensified, each type of lead firm has developed extensive global sourcing capabilities. While 'de-verticalizing' out of production, they are fortifying their activities in the high value-added design and marketing segments of the apparel chain, leading to a blurring of the boundaries between these firms and a realignment of interests within the chain.Industrial upgrading in the global apparel industry is primarily associated with the shift from assembly to full-package production. Compared with the mere assembly of imported inputs, full-package production fundamentally changes the relationship between buyer and supplier in a direction that gives far more autonomy and learning potential for industrial upgrading to the supplying firm. Full-package production is needed because the retailers and marketers that order the garments do not know how to make them. Particular places such as the East Asian newly industrializing economies of Hong Kong, Taiwan, South Korea, and the People's Republic of China have used the full-package role to create an enduring edge in export-oriented development. However, the North American Free Trade Agreement between the United States and Mexico, along with a relative decline in the importance of East Asian apparel exports to the United States, has now created favourable conditions for the extension of full-package production to the North American setting.The article proposes the distinction between three new patterns or models of competition in the North American market: the East Asian, Mexican and Caribbean Basin models. Each model presents different perspectives and challenges for industrial upgrading. The United States continues to define the terms of change, and US firms lead the process toward mass customization and agile manufacturing. Mexico needs to develop new and better networks in order to compete with East Asian suppliers for the US full-package market. The Caribbean Basin model, almost exclusively limited to assembly, would have to develop networks with US retailers and marketers if they were to acquire the skills and resources needed to move into the more diversified activities associated with full-package production. Given the power shifts that are occurring among North American textile, apparel and retail firms, a key question is: Who will be the main organizing agents in modernizing the region's apparel commodity chain? The notion of organizing agents refers to those firms, foreign and domestic, that could enhance the competitiveness of the apparel sector in Mexico and the Caribbean Basin through backward or forward linkages with major producers and retailers. Large firms in different segments of the apparel chain, mainly from the United States, are all vying to become co-ordinating agents in new North American networks that have focused on strengthening Mexico's capabilities to carry out full-package supply. However, the extension of NAFTA-parity to the Caribbean Basin will provide new opportunities for those firms to compete with Mexico on a more equal footing.""