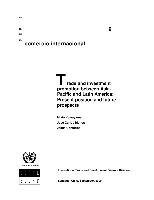 Abstract This document provides an overview of trade relations between Asia and the Pacific and Latin America and explores the possibilities for expanding the modalities of economic relations between the two regions. The analysis covers 12 countries in Asia and Oceania and 11 members of the Latin American Integration Association (LAIA). Interregional cooperation in trade and investment has been on the agendas of countries in both regions for some time. It is often expressed that the present economic relations between the two regions do not reflect the potential for interregional trade and investment that exists in an increasingly globalized world. Given the current low level of economic interaction and in the aftermath of the economic crises experienced in each region in recent years, the governments of both regions have increasingly recognized the need to institutionalize the mechanism of consultation and to possibly implement joint actions in order to strengthen bi-regional economic relations. The document will analyze the present level of, and future potential for, interregional trade and investment flows, and make some recommendations that may contribute to a visualization of several actions plans on interregional cooperation. Chapter I begins with a short analysis of LAIa's trade performance in the 1990s and its relations with major trade partners outside the region. This is followed by a brief examination of the dynamics of trade flows between Latin America and Asia-Pacific, considering the effects of the Asian financial crisis on Latin American trade. The chapter ends with a review of market-access problems and the on-going process of liberalization in Latin America.Chapter II analyzes the same trade relations from the viewpoint of Asian and Paci f i c countries. Chapter III presents some general data on the importance of intra-industrial trade in Asia-Pacific and LAIa's trade, with a view to suggesting a possible route for future relations between the two regions. Chapter IV provides a brief survey of the linkages between trade and foreign direct investment (FDI) and a description on the recent evolution of foreign direct investment in Latin America, indicating some options for increasing the presence of Asia-Pacific in the region.The last chapter, Conclusions and Recommendations, emphasizes broad opportunities that lie in the development of interregional economic linkages. Recommendations are made in five areas: 1) mechanisms for per manent or periodic consultation on issues related to trade and investment; 2) information creation and exchange (e.g., information centers, market access, business facilitation, policy dialogueue on WTO); 3) guidelines for trade facilitation action plan and investment promotion action plan; 4); business community participation; and 5) economic and technical cooperation (food security, technological upgrading, transport infrastructure, environment protection).