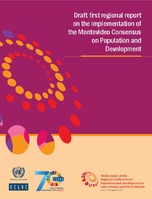 This draft report seeks to give an account of progress in the implementation of the priority measures of the Montevideo Consensus on Population and Development in the region, as well as the differences between countries in terms of the degree of implementation. By highlighting relevant national experiences, it also seeks to facilitate the exchange of good practices among countries so that they can benefit from each other in their efforts to advance the implementation of the actions of the Montevideo Consensus.

Executive summary .-- Chapter I. Background on the process for regional follow-up of the Montevideo Consensus: preparation of the draft first regional report .-- Chapter II. The demographic context in Latin America and the Caribbean .-- Chapter III. Regional follow-up of implementation of the Montevideo Consensus
on Population and Development . A. Full integration of population dynamics into sustainable development with equality
and respect for human rights. B. Rights, needs, responsibilities and requirements of girls, boys, adolescents and youth. C. Ageing, social protection and socioeconomic challenges. D. Universal access to sexual and reproductive health services. E. Gender equality. F. International migration and protection of the human rights of all migrants. G. Territorial inequality, spatial mobility and vulnerability. H. Indigenous peoples: interculturalism and rights. I. Afrodescendants: rights and combating racial discrimination.