Foreign Direct Investment in Latin America and the Caribbean 2018 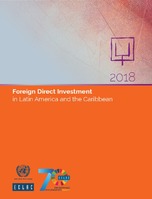 Foreign Direct Investment in Latin America and the Caribbean 2018

This publication sets out and analyses the main foreign direct investment (FDI) trends in the countries of Latin America and the Caribbean.
In 2017, certain trends that had already emerged in the global economic landscape became more established. In particular, announcements of potential restrictions on trade and pressures to relocate production to developed countries were confirmed. At the same time, China has taken steps to restrict outflows of foreign direct investment (FDI) in order to align these flows with its strategic plan. Adding to these factors is the expansion of digital technologies, whose international expansion requires smaller investments in tangible assets. Firms in these areas are heavily concentrated in the United States and China, which reduces the need for cross-border mergers and acquisitions.
The combination of these factors goes some way to explaining the drop in global FDI in 2017, even amid stronger global economic growth (3.2%), abundant international liquidity, high corporate returns and optimism in the financial markets. In this international context, FDI flows to Latin America and the Caribbean contracted for the fourth year in a row in 2017, to US$ 161.673 billion, 3.6% down on the 2016 figure and 20% less than in 2011.