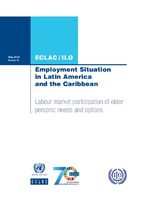 The first part of this edition of Labour Situation in Latin America and the Caribbean analyses the performance of the region’s labour markets in 2017. The 1.3% economic growth that the region saw after two years of contraction produced a slight acceleration in wage job creation and stabilized the urban employment rate which had been falling for three years in a row (from 2014 to 2016). However, not enough jobs were created to reverse the increase in the urban open unemployment rate, which, after climbing 2.0 percentage points over the previous two years, rose again, albeit less sharply (0.4 percentage points), to reach 9.3%, the highest level since 2005.

The second section of the report examines the increasingly important issue of the extent and nature of older persons’ participation in Latin American labour markets. Lack of pension income is the main reason why older people in the region continue to work beyond retirement age. In particular, the report highlights the limited coverage of contributory pension systems among women. Although many countries have made significant progress in expanding the coverage of these systems and have created or extended non-contributory schemes in recent years, a high percentage of older persons are forced to continue working because they do not receive a pension. Meanwhile, a minority of older people —who usually have higher levels of education—continue to work as a matter of personal preference, even if they receive a pension.