Effects of trade opening on household welfare: the Chilean case 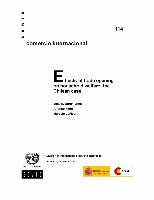 Effects of trade opening on household welfare: the Chilean case

The document presents an ex-post analysis of the effects of trade policy changes on poverty and income distribution in Chile between 1999 and 2006. We follow the methodology developed by Porto (2006) and Nicita (2009), both of whom identify three channels of transmission through which a change in trade policy variables (e.g., tariffs) affects the welfare of households. The effect is estimated by characterizing the labor demand elasticities, the effect of border prices on revenues, and the ensuing effect on the wage bill of each industry.