Economic Survey of Latin America and the Caribbean 2017: Dynamics of the current economic cycle and policy challenges for boosting investment and growth 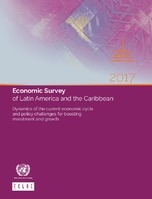 Economic Survey of Latin America and the Caribbean 2017: Dynamics of the current economic cycle and policy challenges for boosting investment and growth

The 2017 edition of the Economic Survey of Latin America and the Caribbean consists of three parts. Part I outlines the region’s economic performance in 2016 and analyses trends in the early months of 2017, as well as the outlook for the rest of the year. It examines the external and domestic factors that have influenced the region’s economic performance and draws attention to some of the macroeconomic policy challenges of the prevailing external conditions, with a modest uptick in global economic growth and trade amid persistent uncertainty, especially in relation to political factors.
The thematic section of this edition analyses the characteristics of the current economic cycle in the region (2009-2016) and contrasts it with the two preceding cycles (1990-2001 and 2002-2008). It also identifies and attempts to explain some of the determinants of the cycle and outlines possible strategies for regaining growth.
Part III of this publication may be accessed on the website of the Economic Commission for Latin America and the Caribbean (www.cepal.org/en). It contains the notes relating to the economic performance of the countries of Latin America and the Caribbean in 2016 and the first half of 2017, together with their respective statistical annexes. The cut-off date for updating the statistical information in this publication was 30 June 2017.

Presentation .-- Executive summary .-- Part I: The economic situation and outlook for 2017 .-- Chapter I. Regional overview .-- Part II: Dynamics of the current economic cycle and policy challenges for boosting investment and growth .-- Chapter II: A comparative analysis of business cycles in Latin America and the Caribbean in the period 1990-2016 .-- Chapter III. The region in an international context of slow growth and financial globalization .-- Chapter IV. Economic policies in the current cycle .-- Statistical annex.