Food and nutrition security and the eradication of hunger CELAC 2025: Furthering discussion and regional cooperation 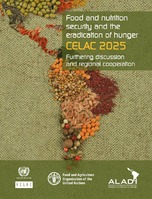 Food and nutrition security and the eradication of hunger CELAC 2025: Furthering discussion and regional cooperation

The region of Latin America and the Caribbean can boast a successful track record in the process of eradicating hunger: it is the only region in the world that has halved both the proportion of people who suffer from hunger (the target set in the Millennium Development Goals) and their absolute number (the target set at the World Food Summit of 1996).
This publication aims to provide the region’s countries with up-todate and timely information on the status of food and nutrition security; on the role in eradicating hunger played by the different areas such as agriculture, agrifood trade and natural resources management; and on the possibility of successfully addressing the twin burden of malnutrition, in a context where the effects of climate change could threaten the progress achieved in Latin America and the Caribbean thus far.
The CELAC Plan for Food and Nutrition Security and the Eradication of Hunger 2025 is a cross-cutting tool for achieving the Sustainable Development Goals of the 2030 Agenda for Sustainable Development; and it thus encourages the countries of Latin America and the Caribbean to redouble their efforts to identify key policy areas that will make it possible to speed up and consolidate the process of eradicating hunger and tackle the twin burden of malnutrition in the region, in which overweight and obesity are increasingly adding to that scourge.