40 years of the regional gender agenda 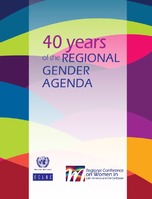 40 years of the regional gender agenda

The first Regional Conference on the Integration of Women in the Economic and Social Development of Latin America was held almost 40 years ago (Havana, 1977). It provided a regional forum for exchange after the World Conference of the International Women’s Year in Mexico City in 1975, and supported the idea of social demands for women’s rights and gender equality (which were starting to spread from country to country) being translated into government commitments. On that occasion ECLAC member States adopted the Regional Plan of Action for the Integration of Women into Latin American Economic and Social Development, the region’s first road map for progress towards the recognition of women’s contribution to society and to make visible the obstacles that they faced in improving their situation. At that same conference, the Governments gave the Economic Commission for Latin America and the Caribbean (ECLAC) a mandate to convene periodically, at intervals of no more than three years, a Regional Conference on Women.
In fulfilment of this mandate, over the next four decades ECLAC organized 13 Regional Conferences on Women, first through its Women and Development Unit, then its Division for Gender Affairs. This intergovernmental platform, with the active participation of the women’s and feminist movement and the support of the entire United Nations system, has become the main forum for the negotiation of a broad, profound and comprehensive Regional Gender Agenda, in which women’s autonomy and rights are front and centre. Policies for development and overcoming poverty have always been a key focus at these meetings.
This publication is a contribution to the implementation of the commitments undertaken. It is a compilation of all the agreements adopted by the Governments at the sessions of the Regional Conference on Women in Latin America and the Caribbean and will serve not only as a tool for reference, but above all as a tool for action and for building a future based on the collective memory of the women of Latin America and the Caribbean.