Latin America and the Caribbean in the World Economy 2015. The regional trade crisis: assessment and outlook. 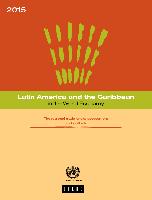 Latin America and the Caribbean in the World Economy 2015. The regional trade crisis: assessment and outlook.

With external conditions sluggish and highly uncertain as the global economy still struggles to shake off the effects of the economic crisis of 2008-2009, the Latin American and Caribbean region is not isolated from these effects and is projected to record a small drop in gross domestic product (GDP) in 2015, followed by a weak recovery in 2016.
Against this backdrop, 2015 will be the third consecutive year of increasing declines in regional export values; a state of affairs not seen since the Great Depression of the 1930s. This poor performance reflects the end of the commodity price boom, the slowdown of the Chinese economy, the weak recovery of the eurozone and the lacklustre economic activity in the region, particularly in South America.