Belize: Macro socio-economic assessment of the damage and losses caused by tropical depression 16 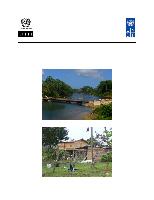 Belize: Macro socio-economic assessment of the damage and losses caused by tropical depression 16

Tropical Depression 16 (TD16) crept up on disparate populations in Belize over a period
8-16 October 2008. TD16 struck less than five months after the first named tropical storm of the
2008 Atlantic season, Arthur. The storm had been forecasted to dump up to 10 inches of rain
over Belize and up to 15 inches in isolated areas. Arthur had devastating effects on Belize,
particularly the southern regions where bridges collapsed and lives were lost. It was in the
aftermath of such devastation that Belize faced TD16. The consequence of TD16 is what falls
under the purview of this assessment.

.--I. Background.--II. Affected population.--III. Description of damage and losses by sector.--IV. The macroeconomic effects.--V. Considerations to the recovery and reconstruction processes conclusions and recommendations.