The employment situation in Latin America and the Caribbean: Crisis in the labour markets and countercyclical responses 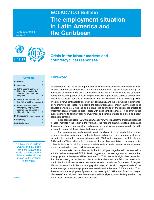 The employment situation in Latin America and the Caribbean: Crisis in the labour markets and countercyclical responses

As predicted in the first bulletin, produced jointly by the Economic Commission for Latin
America and the Caribbean (ECLAC) and the International Labour Organization (ILO),
the impact of the economic crisis continued to be felt in Latin America and the Caribbean
during the second quarter of 2009. Regional exports of goods and services contracted in
response to sluggish demand on international markets, while remittances and foreign direct
investment flows continued to fall, credit lost its buoyancy and the total wage bill diminished,
owing mainly to job losses. As a result, the growth forecasts of many countries had to be
adjusted downwards. Since the end of 2008, the countries of the region had started to
implement countercyclical policies —albeit with significant differences— in an effort to use
public spending to counter flagging investment and consumer-spending levels and boost
aggregate demand.
In this second bulletin, ECLAC and ILO show how the impact of the crisis has deepened
in labour markets in the region in the first half of the year and examine existing options and
the outcome of public-infrastructure and emergency employment programmes designed to
mitigate the impact of the crisis on the labour market.
The unemployment rate has risen in practically all countries compared with the previous
year and this situation worsened further in the second quarter, when urban unemployment
exceeded the rate of the corresponding period in 2008 by 1 percentage point (to stand at
8.5%, up from 7.5%), while in the first quarter, the variation was 0.6 of a percentage point.
Labour indicators also point to an increase in informality, a decline in employment with social
protection and a decrease in full-time employment.
Labour-market trends observed in the first half-year, together with the forecast for
a 1.9% decline in regional GDP in 2009, suggest that the average annual rate of urban
unemployment in the region will be close to 8.5%. This forecast is slightly less pessimistic
than the estimate given in the first bulletin; this is attributable to the fall in the participation
rate in the first half-year to levels that are expected to remain low for the rest of the year.
Without this reduction in the labour supply, due largely to the “discouragement effect”, the
annual average urban unemployment rate would stand at between 8.8% and 8.9%. Thus,
the open urban unemployment figure would increase by 2.5 million and if the “discouraged
job-seekers” are included, then the number of additional persons not finding a niche in the
urban labour market would climb to 3.2 million. In the region, as in the rest of the world, there are signs that
the crisis may have reached bottom in the middle of the year. In
many countries, production levels have ceased their decline and
there are indications of an incipient recovery leading to cautious
optimism that there may be a moderate upturn in labour markets
in the fourth quarter. The pace of recovery will vary from one
country to the next and is expected to be gradual at best.
Even with the return to a growth path, there should be
no illusion that the labour problems will immediately disappear.
First, the recovery in employment is expected to lag behind the
upturn in economic activity. Second, since economic growth is
likely to remain moderate in the short term and well below the
rates recorded between late 2003 and mid-2008, demand for
labour and consequently the generation of good-quality jobs
will continue to be weak. Thus, countries should not relax their
efforts to defend and create decent jobs, but rather should take
steps to improve the effectiveness and efficiency of available
instruments. In this way, the region will be in a better position
not only to confront the challenges of economic recovery, but
also to strengthen the foundations for social inclusion and for
advancing under more favourable conditions towards fulfilment
of the Millennium Development Goals.