A new generation of standards: implications for the Caribbean and Latin America 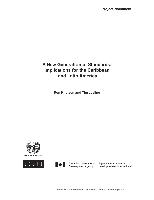 A new generation of standards: implications for the Caribbean and Latin America

International trade in food products has expanded significantly during the past few decades. These products include fresh and processed fruits and vegetables, fish, live animals and meat, nuts, and spices. However, international trade of these products is subject to a huge array of standards and regulations imposing potentially large compliance costs to many developing country suppliers.Standards and regulations apply to both the products themselves and the processes by which they are processed, handled, packed, etc. and respond to health concerns, consumer preferences and strategic commercial interests. Sanitary and phytosanitary measures (SPS) and other technical requirements can inhibit international trade in foodstuffs and other agro-industrial industries through varied channels. Costs of compliance could sometimes be so high as to induce loss of developing countries' comparative advantage in the production of basic foodstuffs. Exporting firms must often undergo significant structural adjustments to be able to accommodate the numerous and sometimes differing requirement of more developed countries. This is aggravated by the emergence of a growing number of private standards in addition to public standards. Given the lack of accredited laboratories and technical expertise in developing countries, suppliers face significant challenges to sell in global markets. Lack of harmonization can affect the performance of exporting firms.The nature, form and context of standards in the food and agricultural sector have been changing rapidly. We are entering a new world of standards that will demand significant changes in production and marketing strategies. These developments will present challenges to most of those involved in trade in agricultural products, but they will be particularly problematic for small producers in the developing countries. The countries of the Western Hemisphere have many small producers who have, or would like to have access to the large markets of the region. This paper is primarily designed to explain the emerging system of standards in the Western Hemisphere.Decisive action will need to be taken by developed countries and international organizations to avoid the development of a new set of sanitary and phytosanitary barriers to trade. These barriers are in part a function of regulatory action by governments and in part a reflection of the emergence of private standards often emphasizing processing methods. Institutions are being set up that are mandated to develop and monitor compliance to those standards. Most of these institutions operate either at the domestic or the multilateral, but regional bodies in the Americas also have an important part to play. To the extent that the mix of standards and institutions can be improved in the region, all producers will have better access to the richest markets in the world.Several countries in the Latin American and Caribbean region have expressed their need to understand the impact of food safety standards on trade issues.This document is part of the technical assistance activities of the Project "Strengthening Trade Related Capacities in the context of trade liberalization in the Americas", financed by the Canadian International Development Agency (CIDA) and executed by the ECLAC Washington Office.Preliminary results of the study on world SPS standards and principles were presented at the Fifth Annual North American Agrifood Market Integration Consortium Workshop, New Generation of NAFTA Standards, on May 21-23, 2008 in Austin, Texas.