Tax policy in Latin America: Assessment and guidelines for a second generation of reforms 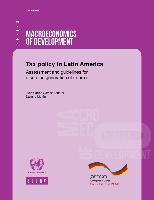 Tax policy in Latin America: Assessment and guidelines for a second generation of reforms

In recent years, the countries of Latin America have introduced a series of reforms aimed at strengthening
and modernizing their tax systems. While the reforms are part of an ongoing process carried over from
earlier periods, the objectives pursued place a renewed emphasis on distribution issues, in clear contrast
with the spirit of the tax reforms implemented in the region in the 1980s and 1990s.
This paper identifies the stylized facts that have characterized Latin American tax systems over
the past two decades. Although there is a lot of heterogeneity among countries, the tax burden has
increased in almost all cases, and the tax structure has, on average, become more concentrated on the
value added tax and the income tax. Nevertheless, certain structural weaknesses have been maintained
over time, such as the bias in favour of indirect taxation and the low weight of personal income taxes,
which determines the low redistributive impact of taxation at the regional level. Moreover, the high
degree of informality, the high level of tax expenditures (or concessions) and the unacceptable levels of
tax evasion hinder the consolidation of tax systems based on sufficiency, equity, and efficiency.
As the objectives of tax policy expand beyond the merely fiscal, as has been the case in some
recent experiences, it is becoming increasingly important to establish new guidelines for tax reform in
the countries of the region.

Introduction .-- I. The tax situation in Latin America: background and stylized facts .-- II. The behavior of the main taxes in the region .-- III. The economic and social consequences of the current tax systems .-- IV. Tax reform guidelines for Latin America.