Facilitation of international trade in goods 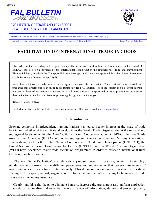 The FAL Bulletin is reverting to its original concept, that is, facilitation of trade in the broad sense. In the context of ECLAC, this is a topic covered by the International Trade Unit in the International Trade and Development Finance Division, to which the Transport Unit also belonged until it was incorporated into the Natural Resources and Infrastructure Division in April 1999.In an effort at inter-divisional cooperation starting with this issue, the International Trade Unit will be responsible for preparing four articles per year on trade facilitation for the FAL Bulletin. These are certain to be of great interest not only to those of our readers concerned with multi-modal ocean transport and customs procedures but also to those with links to the broader issue of promoting foreign trade in the region.

Trade Facilitation in Mercosur - the Most...
Computerization of maritime ports, e-commerce...
The effect of y2k on Western Hemisphere transport...
Twentieth meeting of national customs directors...

Facilitation of international trade in goods