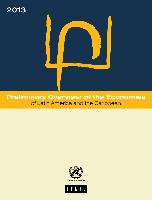 The Latin American and Caribbean region recorded GDP growth of 2.6% in 2013, down from 3.1% in 2012, testifying to the continuation of the economic slowdown apparent in the region since 2011. The countries’ growth rates differed significantly, however.
In 2014 the global economy will present opportunities and threats for Latin America and the Caribbean. The currency depreciation seen in several countries in the region in recent months, possibly strengthened by a shift in future financial flows towards developed countries, could, if sustained, increase incentives for investment in tradable sectors other than the region’s traditional exports (commodities), while redirecting expenditure to ease pressure on the current account. Complementary growth-supporting industrial, trade, environmental, social and labour policies that take into account the needs of small and medium-sized enterprises, could help to lessen the region’s structural heterogeneity. The pathway of growth combined with greater equality would thus gain economic and social sustainability, with greater reliance from investment and exports than in the recent past. As discussed in other ECLAC documents, this combination would be aided by social covenants for investment.