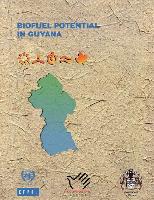 Abstract
Guyana depends on imported fuel to meet the needs of its transport sector. In recent years, pricesof derivatives of petroleum have increased significantly, further widening the current account
deficit. In 2005, fuel accounted for 29% of the value of imports of the country.
The technology of using ethanol mixed with gasoline in four-stroke cycle engines is wellknown,
and, does not require any changes in vehicles for levels of ethanol in the mixture up to
10%. This technology is used in many countries with vehicle fleets, similar to those of Guyana.
The sugarcane industry of Guyana constitutes one of the most important economic
activities of the country and is one of the main sources of foreign exchange. However, it is
subject to very significant market risks, associated with changes in the Sugar Protocol and the
reduction of preferential prices on the market of the European Union.
A diversity of raw materials, sweet or starchy, may be considered for the production of
ethanol. However, when considering costs, available technology and energy productivity,
sugarcane (directly as juice or as molasses); presents the most attractive option. In time, other
possibilities may be considered.
In the most conservative scenario (use of final molasses, producing 8.8 liters of ethanol
per ton of processed sugarcane);, it is estimated that 30.8 million liters of ethanol may be obtained
annually from the sugarcane industry in Guyana. This would be nearly 3 times the anticipated
demand of 11.5 million liters, if a mixture of gasoline with 10 % ethanol were to be used in
Guyana's vehicles. If other raw materials with higher productivity (sugarcane juice or primary
molasses); are considered, the available potential ethanol would increase proportionally.
In 2005, the export price of molasses was US$ 83 per ton. Each ton of molasses can
produce 260 liters of ethanol. This implies an estimated opportunity cost of US$ 0.392 per liter
of ethanol. This is lower than the US$ 0.463 per liter that Guyana paid for its imported gasoline
in 2005, indicating the competitiveness of the biofuel. Ethanol from molasses has consistently
been price competitive in the past few years, even without consideration of positive externalities
associated with it.
If Guyana were to utilize a mixture of gasoline with 10 % ethanol, a distillery producing
65 thousand liters of ethanol daily would be required to satisfy national demand. This would
require an investment of approximately US$ 6.5 million. It would result in a net earning of approximately US$ 800.000 and annual savings of US$ 5.4 million on the energy import bill, at
2005 prices.

Present conditions of the energy and the agro-industrial sector of Guyana provide an
excellent opportunity for the production and use of ethanol as a source of fuel in the country.
Furthermore, in addition to price considerations, it is important to be able to produce locally part
of the national energy demand, using available natural resources and proven technologies. This
would also stimulate diversification in the sugarcane industry which is currently exposed to well
known challenges. Moreover, the use of ethanol as a source of energy would have significant
environmental advantages. All together, these conditions make a decidedly sufficient and robust
case to promote the use of ethanol for energy security in Guyana.

The promotion of ethanol as a source of fuel in Guyana requires the collaboration of all
institutions and stakeholders arriving at an operational mechanism for the introduction of ethanol
within the energy sector. For such an initiative to be successful clear timelines should be
established and commitments obtained. It should also include a component for building public
awareness as well as involvement of the local science and technology community.