Economic efficiency of free and open source software in the public sector: the example of Chile 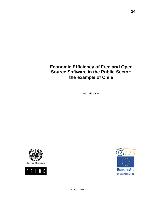 Economic efficiency of free and open source software in the public sector: the example of Chile

This paper reviews the advantages and disadvantages of free and open source software (FOSS) in the public sector. It is based on a survey conducted in late 2004 with the informatics community of the government of Chile, which represents the key IT decision-makers in the Chilean public sector. The survey identified criteria that affect successful deployment and usage of FOSS. The balanced scorecard was used as a basic approach for identifying the strategic IT priorities and objectives of Chilean public institutions. In addition to the survey, respondents were interviewed to make out possible positive and negative effects on the strategic objectives due to the use of FOSS. The results show that also FOSS is still backward in terms of functionality and user friendliness in comparison with closed source software, it offers various strategic advantages like higher security and transparency which are very important especially in the public sector. Due to these advantages, FOSS can compensate or even outperform still existing disadvantages. It has to be annotated that these disadvantages are often only a matter of time, until motivated members of the worldwide FOSS community eliminate them. When interviewing the IT specialists of the public sector in Chile, a very enthusiastic, open-minded and also motivated attitude towards the application of free and open source software could be perceived. However, in the majority of cases there is not enough time or resources to concentrate on doing feasibility investigations for FOSS in the institutions. Some further conclusions include that software piracy is serious jeopardy for the further development of FOSS, especially in developing countries. Due to lock-in effects, it can be that end-users even do not get the possibility to discover FOSS or even take the chance to join FOSS projects. It is also very important that governments manifest their opinion related to the current FOSS debate. The role of software patents needs to be demystified and advantages and disadvantages related to transparency, lock-in, public property and innovation need to be discussed objectively. The public sector of an information society needs to take position and formulate clear statements regards eventual trade-offs for the future. This publication is a contribution to this process in Latin America and the Caribbean, based on the call for research made in Goal 8 of the Regional Action Plan for the Information Society, eLAC2007 (http://www.ecalc.org/SocInfo/eLAC).""