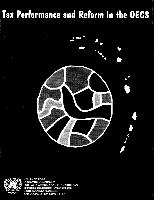 Introduction
Based on the evidence of the last few decades, it is widely
accepted that the State can be an obstacle to development. The corollary to this, of course, is that public policy can play a pivotal role in creating a growth-oriented environment and in promoting change. Not surprisingly, the major thrust of the structural reforms of recent years has been in creating a more effective State that can work in partnership with the private sector for the public good. An appropriate regulatory and institutional framework is critical to the functioning of both the financial and real sectors. In this context, one of the most powerful instruments at the disposal of the State is the tax system which not only provides the government with the resources needed to carry out its functions, but can also be used to achieve economic and social objectives, such as growth, employment and equity. The tax system, however, is a double-edged sword in that it can be used to create or destroy incentives. Taxes not only impact directly on saving and investment, but are also a tool to redistribute income, influence resource allocation and deal with pressures bearing on inflation and exchange rates. In situations where there is limited scope for the use of monetary policy, the tax system takes on particular significance in addressing internal and external imbalances.
In practice, the tax system has to straddle several different
functions at the same time, and its structure is influenced not only by culture, social and economic conditions, but by politics and power. A tax regime can never remain fixed, since changing circumstances can make it irrelevant or ineffective. Inflation, growth and changes in the structure of output, hanges in the distribution of income, trade liberalization, demographic changes, the emergence of new influential groups, increased levels of social services, and so on, can force changes in the tax structure. Political parties are associated with different ideologies and priorities and as governments change, the approach to taxation and welfare may also change. Governments everywhere are under constant pressure to provide more and better quality services with less taxation, and in a democratic setting where elections decide who holds power, the need to meet popular expectations requires a considerable amount of creativity and innovation, given the fact that there are limits to taxation in
any economy. The effect on effort and investment has to remain a major consideration. The immediate need for revenue, however, can overwhelm concerns over the distortions caused by particular fiscal measures, and the effect could be felt in the long-term performance of the economy.
In the Organization of Eastern Caribbean States (OECS);, the need to become more self-reliant and developments in the domestic economy and the international economic environment are creating pressures for change across a
wide spectrum of governmental functions and activities. With respect to the tax system, the tax structure not only has to be considered in the context of the conjunctural factors emanating from national, regional and global trends, but
also has to take account of the resource potential for increasing the standard of living. The constraints of size on economic development has received a great deal of attention in the literature. Small markets are not only associated with
diseconomies of scale which act as a disincentive to investment, but small size also results in high unit costs of infrastructure and production. A narrow resource base underlines some of the structural challenges facing these
countries. Exposure to the devastating effects of storms contributes to a very volatile and unpredictable economic environment where gains made in one period can quickly be lost in another. In one country, Montserrat, the recent volcanic eruptions have devastated the economy and the social fabric, leaving a gigantic challenge in their wake. With the decline of traditional activities associated with the colonial economy, the OECS has used its location, natural assets, legal
system and tax regulations to create new sources of income and employment. In the context of the challenges facing the governments in these countries, the administrative and institutional structures have to remain sensitive not only to
changes in the society and economy, but to the demands of an open economy and developments in an increasingly competitive regional and international environment.
This paper is focused largely on the tax systems of OECS
members, and is organized as follows. Following the introduction, the first section discusses the salient features of the OECS economies and recent economic performance in these island States. The second discusses some issues relating to saving and investment. In the third, the tax systems in the OECS are outlined and evaluated. This includes a discussion on tax revenue and trade policy reforms. And in the final section some concluding remarks and
ecommendations are presented.