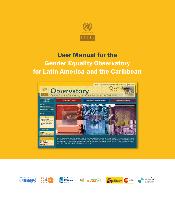 Fifteen years after approval of the Beijing Platform for Action at the Fourth World Conference on Women, and following nearly 30 years of developments in gender policy, there have been undeniable and important advances in the region. The Gender Equality Observatory for Latin America and the Caribbean is an instrument that identifies these advances, while also pointing to areas in which the countries' progress has failed to keep pace with their commitments. The major accomplishments of this period include the formal institutionalization of machineries for the advancement of women in the 39 countries of the region. In Latin America, 35% of countries now have ministries, or entities of ministerial rank, to address gender equality, while 20% have created gender equality councils or institutes that report to the office of the president, and 45% have established such bodies as part of ministries. In the Caribbean subregion, 90% of the entities designed to deal with gender equality report to a ministry. There is a smaller group of countries that have not yet fulfilled their Beijing commitment to create high-level institutions to implement policies to promote gender equality. Significant advances have been made in securing gender equality in political representation and with regard to the exercise of power. Women's participation in decision-making, though it varies from one country to another, is now part of regional agendas. The percentage of women parliamentarians ranges from 40% in Argentina and Costa Rica to less than 10% in Guatemala. Particularly noteworthy is the case of Chile, where the presidency of Michelle Bachelet embraced an agenda of gender parity and social protection in which women played a pivotal role. At the time that the creation of the Gender Equality Observatory for Latin America and the Caribbean was approved, there was a conviction that there was a need for more and better evidence (both quantitative and qualitative); of achievements and advances, the ability to identify challenges and generate appropriate responses, and tools that Governments could use to provide timely response to trends and to detect emerging phenomena. The Observatory is a tool for monitoring and tracking public policy, anticipating emerging social developments, and gaining empirical evidence, based on official data, regarding the status of women, and their inequalities in relation to men. The Observatory requires countries to implement information systems to provide data on these realities.