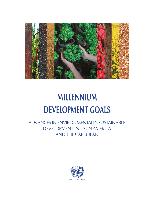 By adopting the Millennium Declaration of 2000, the 189 States Members of the United Nations undertook a commitment to redouble their efforts to eradicate poverty in the world. This led to the establishment of the Millennium Development Goals, with targets to be achieved by 2015, taking 1990 as a base year. Environmental sustainability is included among the Goals owing to its great relevance to poverty reduction efforts, health, gender equality and the other components of development. The targets associated with the seventh Millennium Development Goal —to ensure environmental sustainability— aim to ensure the integration of the principles of sustainable development into public policies, reduce the loss of biodiversity and natural resources, cut atmospheric pollution, broaden access to safe drinking water and sanitation and decrease the number of slum-dwellers. The agencies of the United Nations assumed a commitment to support and monitor progress towards the achievement of the Goals derived from the Millennium Declaration. In Latin America and the Caribbean, the agencies fulfilled this commitment by coordinating their efforts to report in 2005 on all eight Goals; to give an account in 2006 of the progress towards attainment of the third Goal on gender equality; and to examine in 2008 advances towards the right to health, which encompasses Goals 4, 5 and 6. Ten years after the Millennium Declaration, this report sets forth the progress the Latin American and Caribbean region has made, as well as the challenges it still needs to overcome, in order to meet the targets of the seventh Goal and attempts to offer instruments by which to steer policies and actions to ensure the environmental sustainability of development in the region. As discussed in the report, significant progress has been made in some aspects of environmental sustainability: the total surface area under protection has increased steadily in the last decade, the consumption of ozone-depleting substances has decreased considerably, and the region has made strides in expanding the coverage of drinking water and sanitation services. These are all poitive developments towards achieving the targets of the seventh Millennium Development Goal. Many hurdles remain, however, such as the continued depletion of forest areas and the steady increase in CO2 emissions caused by the burning of fossil fuels and the production of cement. In both cases, the region has been tending to diverge from the targets. There is also a lack of specific data on issues that are crucial for the region, such as the management of water resources, fishing and endangered species. Indirect and complementary information suggests that the region is not on track to meet the agreed targets in these cases either. For all these reasons, now, only five years from the deadline for attaining the Millennium Development Goals, it is essential to step up our efforts. In this, the support of the international community will be essential. Today multiple obstacles —including the financial, climate, energy and food crises— threaten to divert the region away from fulfilment of its promises in the area of environmental sustainability. Although these crises are imposing new challenges on the Latin American and Caribbean countries, they also represent opportunities to instil changes that can propel the region towards a more equitable and sustainable type of development. This document was prepared by the Economic Commission for Latin America and the Caribbean (ECLAC) in close collaboration with the regional offices of the other agencies in the United Nations system, particularly the United Nations Environment Programme (UNEP), the United Nations Development Programme (UNDP), the United Nations Human Settlements Programme (UN-Habitat), the United Nations Children's Fund (UNICEF), the United Nations Population Fund (UNPFA), the Office of the United Nations High Commissioner for Human Rights (OHCHR), the Joint United Nations Programme on HIV/AIDS (UNAIDS), the Food and Agriculture Organization of the United Nations (FAO), the United Nations Educational, Scientific and Cultural Organization (UNESCO), the International Labour Organization (ILO), the Pan American Health Organization (PAHO) and the United Nations Office for Project Services (UNOPS). We trust that this report will be of use to policymakers and all those committed to achieving environmental sustainability in the process of regional development. Alicia BárcenaExecutive Secretary Economic Commission for Latin America and the Caribbean (ECLAC)

Sustainable Development in Latin America and the...
Millennium Development Goals. Achieving the...
What kind of State? What kind of equality? XI...
Structural change for equality: an integrated...