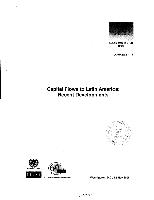 In the midst of broad global market turmoil and mounting fears of a recession in the U.S., emerging markets have shown strong growth and economic resilience. For the first time in recent history, the external meltdown has not sparked capital flight from Latin America. Quite the contrary, Latin American markets have been seen by investors as a safe haven from the supbprime woes afflicting the U.S. economyDespite showing significant resilience, Latin American debt spreads widened in the first quarter of 2008, and after reaching record lows in May 2007, they are now re-approaching pre-Asian crisis levels. The JPMorgan EMBI+ Latin American composite widened by 68 basis points in the first quarter, with spreads reaching 336 basis points at the end of March.In 2007, spreads remained at tight levels, although widening in comparison to 2006. The EMBI+ Latin American composite widened by 82 basis points in 2007, ending the year at 268 basis points. Most of the widening took place in the second half of the year, after Latin American spreads reached record low levels in May.Spreads remain at low historic levels, however, and the recent increase in global volatility has put much less stress on emerging markets than it would have four or five years ago. On average, Latin American assets have become more attractive relative to other asset classes. Emerging market spreads are roughly half of the spreads on U.S. junk (high-yield) bonds, and have been under less pressure during the current turbulence in financial markets The spread differential between the EMBI+ and the U.S. high-yield ("junk") bonds has continued to soar in the first quarter of 2008, increasing to 410 basis points at the end of March 2008, compared to 291 basis points at the end of 2007.Latin American stocks have shown incredible resilience as well. Since the beginning of the year the Morgan Stanley Capital International (MSCI) Latin American Index gained almost 11%, while the Emerging Markets Index lost 3% and the G-7 Index lost 3.6%. In 2007 the MSCI-EM index gained 37%, while the Latin America component gained 47%, almost nine times as much as the MSCI-G7 index for developed markets.There has been a tightening of financing conditions in Latin American markets more recently, however, although the region remains more resilient to shocks than in the past. Corporate external debt issuance has fallen sharply as market conditions have deteriorated since August 2007. JPMorgan has scaled back its forecast of emerging market corporate issuance of external bonds to half of last years level: US$ 72 billion for 2008, down from US$ 150 billion in 2007, recognizing the adverse effect that the turmoil in global markets has had on corporate issuance.Latin American policymakers may face difficult trade-offs in the months ahead because of the current combination of falling international interest rates, a weakening dollar, and rising food prices. Lower international interest rates and a weaker dollar have boosted capital inflows, which has put pressure on domestic currencies to appreciate. In the short-term, this may pose an impasse for monetary policy authorities, since in the absence of upward inflationary pressures they could mitigate appreciation pressures with interest rate cuts of their own. However, this is now very risky, given the rise in food and energy prices. Economic prospects for Latin America are expected to remain positive, but a risk scenario exists. The real underlying risk and the relative impact of the current turmoil on the region hinge to a great extent on how events will play out in the United States, and on what will happen with growth in Europe and Asia, particularly in China. A U.S. downturn has been affecting Latin American countries differently, and should continue to do so in the near future: some will receive a more direct impact due to tight links with the U.S. economy, via trade or through the impact on remittances. Others will feel the impact more indirectly, mainly through lower global economic growth, as the U.S. downturn spreads to European and Asian countries.