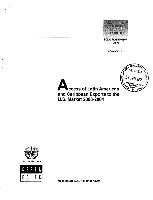 The trade relationship between the United States and Latin America and the Caribbean has grown over the past years to the benefit of both economies. As well, important efforts have taken place in pursuit of free trade. In 2003, the Chile-U.S. free trade agreement was completed and approved by Congress; Central America and the U.S. concluded negotiations (CAFTA) and in 2004 the Dominican Republic was added to the CAFTA; the U.S. also started negotiations with four Andean countries and Panama. This report needs to be placed in the context of an ongoing trading relationship. It is expected to contribute to transparency and the elimination of obstacles to the free flow of trade in the Americas. The classification of trade inhibiting measures follows the definition used in the U.S. Trade Representatives (USTR) yearly publication National Trade Estimate Report on Foreign Trade Barriers. Based on this structure, the report focuses on the three areas of greatest relevance for Latin America and the Caribbean: Imports Policies (e.g., tariffs and other import charges, quantitative restrictions, import licensing, customs barriers). Standards, testing, labeling and certification (e.g., unnecessarily restrictive application of phytosanitary standards). Export subsidies (e.g., export financing on preferential terms and agricultural export subsidies that displace other foreign exports in third country markets).