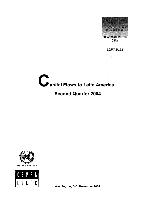 During the second quarter, the prospect of an unexpected U.S. interest rate increase weakened investors' appetite for risk, and capital flows to Latin America faded in response. Latin American spreads increased by 71 basis points during the quarter, up to 607 bps at the end of June, from 536 bps at the end of March. Quarterly issuance in Latin America also suffered, dropping to US$4.7 billion, a level not seen since the last quarter of 2002. As a result, Latin America moved behind Eastern Europe, which issued US$6.3 billion or 39% of total emerging market issuance, compared to 29% for Latin America. Moreover, most of the major Latin American stock prices indices fell. The MSCI Latin American Index, for example, fell by 9.2% during the quarter. Nevertheless, the increase of U.S. interest rates does not seem to have had a negative effect on economic conditions in many Latin American countries so far. The trade surplus in Brazil is higher than anticipated, the economies in Mexico and Peru are expected to grow by 4.5% this year, 0.5% higher than anticipated and the Venezuelan economy continues to be boosted by high oil prices. Some Latin American countries, however, are concerned about how they will meet their financial needs. Argentina's debt proposal fell short in its efforts to satisfy investors and the country has not yet succeeded to meet its commitments on fiscal reforms, sector regulations and public bank reviews. The Colombian government has not improved the fiscal situation of the country and Ecuador continues to show negative fiscal figures. In spite of these concerns, the global situation in Latin America looks brighter than anticipated. After the initial shock in April and May, investors became more confident about the Fed's commitment to limit volatility in the market by increasing slowly and gradually its short-term interest rate. Spreads started to decrease in June in most of the major Latin American economies and Latin American stocks also began to recover.