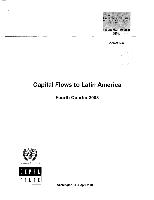 This document provides an overview of the most relevant developments in United States trade policy relating to Latin America and the Caribbean in 2003. U.S. policy continued to promote trade liberalization through advancing negotiations on multiple fronts- globally (WTO), regionally (FTAA) and bilaterally (Chile and CAFTA)- with a view that the various negotiations are mutually reinforcing and seek to create a constructive competition for liberalization among trade partners. The Trade Promotion Authority (TPA) provided an impetus to the signing and Congressional approval of bilateral free trade agreements (FTAs) with Chile and Singapore and the U.S. concluded negotiations on free trade agreements with five Central American countries (Costa Rica, Guatemala, Honduras, Nicaragua, and El Salvador), as well as with Australia and Morocco in the first part of 2004. Currently the U.S. is negotiating with five countries of the Southern African Customs Union, the Dominican Republic and has notified Congress of its intentions to negotiate agreements with Colombia, Peru, Ecuador, Bolivia, and Panama. Furthermore, in November 2003 the U.S. hosted in Miami, the VIII Ministerial Meeting of the Free Trade Area of the Americas (FTAA), were the 34 participating countries reaffirmed their commitment to the successful conclusion of the FTAA negotiations by January 2005. On the multilateral front, in partial fulfillment of the Doha mandate, the U.S. participated in the Cancun WTO Ministerial, which focused on the DOHA negotiating agenda. In December 2003, the U.S. terminated the temporary safeguard measures imposed on certain imported steel products. This action was due in part to the WTo's finding that the temporary safeguard measures were inconsistent with WTO rules.