The development of services in the Caribbean 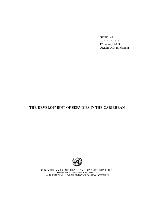 The development of services in the Caribbean

The services sector has grown significantly in most countries and in the world economy as a whole. This has been observed in the progression from primary to secondary and/or tertiary sector-led economic growth and development. Services contribute significantly to output, employment and exports. They account for about 80% of the United States output (GDP) and about 65% of GDP of the European Union. Developed countries are the largest service exporters accounting for over 70% of services traded in the late 1990s. Although developing countries account for a relatively small proportion of internationally traded services their exports of services grew more significantly than those of developed countries during the 1990s. Travel and tourism are the most significant service exports of developing countries. Export of financial services became increasingly significant since the 1990s. Most Caribbean countries have moved directly from primary-sector-led development to tertiary-sector-led development. Despite this, data collection and accounting methods remained largely biased towards measurement of the goods producing sectors of the economy. This is no doubt due to the fact that the output of services sectors is more difficult to measure than that of goods sectors. Part of the problem of measurement has to do with the treatment of services within goods producing sectors. One can determine the contribution of services to output if, for example, a firm manufacturing beverages purchases accounting and transport services from external producers of those services. If, however, the firm in question produces the services in house then those services would be included as manufacturing output. Since services constitute a significant part of production, the total output of services is therefore likely to be underestimated. The contribution of the services sector to growth could therefore be much larger than is officially recorded. Separating the services component from the manufacturing component would help in determining the factors that contribute to the competitiveness of particular industries and products. It would also help in determining the real value of services exports from Caribbean countries. In order to effectively measure or assess the contribution of services to economic growth and development it is useful to know what constitutes a service. A service can be defined as an economic activity that produces a good or product that is intangible or invisible. It can be either a final product or an input into another economic activity. It is therefore best understood in terms of its characteristics. A service, unlike a good, cannot be seen and it has to be consumed at the same time that it is being provided. Services therefore cannot be stockpiled like goods. Economists consider most services non-tradable because they have to be consumed where they are produced and therefore lack mobility. However, technological development and the process of trade liberalisation that has intensified since the 1990s, especially since the General Agreement on Trade in Services (GATS), have facilitated international trade in most services. Nevertheless, the mode of delivery determines the tradability of services. If trade in services is defined only in terms of cross-border supply, that is from supplier country to consumer country, then most services would still be considered non-tradable. In addition to cross-border supply, services can be traded through the movement of the consumer to the supplier country (tourism); through the establishment by the service provider of a firm in the consumer country (bank branch); and through the movement of individual providers (persons) to the consumer country. Trade in services therefore depends on two critical features of economic integration - the movement of capital and the movement of labour. The pace of liberalisation of these movements will determine the growth of international trade in services.