Financial globalization and the emerging economies 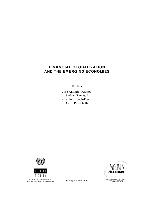 Financial globalization and the emerging economies

This document has been prepared and published jointly by the Economic Commission for Latin America and the Caribbean (ECLAC); and the International Jacques Maritain Institute. Its contents were edited by José Antonio Ocampo, Executive Secretary of the Economic Commission for Latin America and the Caribbean (ECLAC);; Stefano Zamagni, Professor of Economics at the University of Bologna; Ricardo Ffrench-Davis, Principal Regional Adviser of ECLAC; and Carlo Pietrobelli, Professor of Development Economics at the University of Molise, Campobasso.
Foreword
Financial globalization has been a most dynamic component of the continued globalization experienced by the world in recent years. Capital flows to a large number of emerging economies expanded rapidly during the 1990s. Such capital surges were often followed by financial crisis affecting several emerging economies of Asia and Latin America in the 1990s.
There is a broad recognition that financial instability is deeply rooted in the present operation of markets, which has brought consensus on the need to examine the issue in depth, in order to urgently find better solutions for crises prevention and crises management. The meetings of International Financial Institutions, G-7 and various groupings of developing economies have directed their attention to this issue.
This collection of essays results from an international conference convened by ECLAC and the International Jacques Maritain Institute of Rome in Santiago de Chile in 1999. This conference brought together policy-makers, academics, members of international institutions (BIS, EBRD, IMF, OECD);, and social actors (mass media, labour unions, churches and financial activity);.
The book includes four parts. The Introduction collects the opening statements in the conference. Part I contains a discussion of the issues and proposals on how to reform the international financial structure. Part II discusses the national policies to face financial instability, and their role in stabilizing capital flows. Part III includes statements by different social actors on their views on financial globalization and their messages to policy-makers.