Latin America and the Caribbean in the World Economy 1998 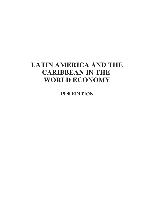 Latin America and the Caribbean in the World Economy 1998

The 1998 edition of Latin America and the Caribbean in the World Economy is divided into four sections. The first section (chapters I and II) is devoted to an examination of the international situation and describes the main short-term trends to be observed in the global economy together with their impact on regional trade. It also examines the evolution of major economic groupings, such as the European Union and the North American Free Trade Agreement (NAFTA), the steps being taken to establish the Free Trade Area of the Americas, and recent decisions taken by the Asia-Pacific Economic Cooperation (APEC) Council, all of which directly or indirectly influences Latin American and Caribbean products' access to the region's principal markets. The second section (chapters III, IV and V) deals with Latin American and Caribbean trade and trade policy in 1997-1998 and includes a discussion of the trade policies and performance of the countries of the region from June 1997 to August/September 1998, an assessment of the various export promotion tools that comply with multilateral trading regulations and standards, and an analysis of the composition of the region's trade deficits during the 1990s. The third section (chapters VI and VII) explores the concept of regional convergence and outlines the main stages to be observed in the regional integration process during the period from June 1997 to August 1998. The fourth and final section (chapters VIII and IX) discusses selected aspects of trade activity and trade policy, compares the experiences of East Asia and Latin America in relation to industrial and trade policy, and analyses the environmental protection policies of the United States and how they have influenced the exports of some Latin American countries.