Home » Publications » Latin America and the Caribbean in the World Economy 2007: 2008 trends
Available in: EnglishEspañol

Latin America and the Caribbean in the World Economy 2007: 2008 trends 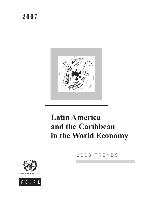 This year's edition of Latin America and the Caribbean in the World Economy is divided into seven chapters. Chapter I contains an analysis of recent trends in the main industrialized and emerging economies and reviews the possible impact of the financial crisis that began in the United States on the world economy and on the economic and trade performance of Latin America and the Caribbean. The effect of the crisis on the prices of commodities (especially food and oil) and the implications for growth, inflation and the region's external sector are also examined. Lastly, the chapter looks at the region's trade figures for 2007 and projections for 2008. Chapter II describes recent developments in the Doha Round, including documents disseminated in July 2008 on negotiations relating to agriculture and non-agricultural market access. It also provides a summary of the main advances and obstacles emerging from those negotiations, with emphasis on the repercussions for Latin America and the Caribbean. Chapter III discusses some new trade-related topics: (i) new security requirements for freight transport; (ii) the development and legal status of private quality standards; (iii) the state of play in discussions on trade and labour rules; and (iv) the debate on the links between climate change, trade and the multilateral trading system. It is argued that these and other issues will be on the international agenda for the next few years and that the region must begin to form unified positions on such topics. Chapter IV examines recent progress in regional integration and the main initiatives under way in the region's integration schemes (the Southern Common Market (MERCOSUR), the Andean Community, the Central American Common Market (CACM) and the Caribbean Community (CARICOM)). The chapter also analyses: (i) Mexico's active policy aimed at strengthening its trade and infrastructure links with Central America; (ii) the Latin American Pacific Basin Initiative; (iii) the South American Community of Nations (UNASUR); and (iv) the hosting by Brazil in December 2008 of a Summit of Heads of State and Government of Latin America and the Caribbean on the subject of regional integration schemes. The chapter concludes with an analysis of the links between investment and services as an instrument of de facto integration. Chapter V reports on the status of negotiations for the adoption of an association agreement between the European Union and each of the above-mentioned subregional integration schemes. In each case, there is a description of the negotiation process, controversial issues and the main challenges. It is noted that, since there is a similar framework for all these negotiations (covering Caribbean and Central American countries, the Andean Community, MERCOSUR, Mexico and Chile), they may generate important synergies for the subsequent convergence of trade and investment rules among the region's integration schemes. Chapter VI presents an in-depth analysis of trade and investment relations between the Latin American and Caribbean region and the Asia-Pacific region, as well as within the latter. It is established that: (i) biregional trade remains inter-industrial in nature, despite the emergence of some new export commodities and high-technology manufactures; (ii) so far, efforts to forge closer links between the Latin America and Caribbean and the Asia-Pacific regions have been undertaken by individual countries on a somewhat sporadic basis; and (iii) there needs to be a more coordinated strategy among countries, so as to strengthen the nexus between trade and investment and to reinforce production and trade linkages through various types of public-private alliances (including free trade agreements).The subject of chapter VII is the foresight analyses carried out by some countries of the Organisation for Economic Co-operation and Development (OECD) with a view to strengthening innovation, competitiveness and export diversification. Despite the importance of such exercises for building consensus around strategic development guidelines, they are not frequently used in Latin America and the Caribbean. Advances achieved in other parts of the world could therefore encourage the countries of the region to use such exercises as an effective tool for promoting competitiveness, innovation and export development.