Latin America and the Caribbean in the World Economy 2001-2002 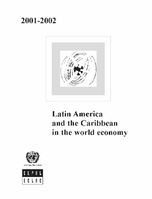 Latin America and the Caribbean in the World Economy 2001-2002

The 2001-2002 edition of Latin America and theCaribbean in the world economy is divided into three parts.
The first part, which concerns international conditions and external trade trends in Latin America and the Caribbean (chapters I, II, III and IV);, analyses the main features of the current international environment and their impact on the region's economies, as well as international trade trends in the various countries in 2001 and in the initial quarters of 2002. Chapter III considers some structural relationships that have emerged in the international integration of the different Latin American and Caribbean countries, from the standpoint of supply. Chapter IV reviews the problems, from the demand side, that the countries of the region face in changing the way they participate in the world economy. The areas covered include trade policy, business practices and developments with respect to preferential liberalization agreements with the United States and the European Union.
The second part (chapters V and VI); looks at trends in regional integration in Latin America and the Caribbean in 2001-2002 and puts forward a number of proposals concerning physical integration in the con-text of relations between the subregional integration arrangements in South America.
The third and last part (chapters VII and VIII); outlines the issues currently under discussion in the new round of multilateral trade negotiations within the World Trade Organization (WTO);, from the perspective of the region's countries. Chapter VIII describes the operation of the WTO Dispute Settlement Body, with special emphasis on the growing participation of the Latin American and Caribbean countries.