Foreign Direct Investment in Latin America and the Caribbean 2010 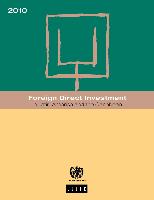 Foreign Direct Investment in Latin America and the Caribbean 2010

In 2010 the Latin American and Caribbean region showed great resilience to the international financial crisis and became the world region with the fastest-growing flows of both inward and outward foreign direct investment (FDI). FDI inflows were up by 40% with respect to 2009 and stood at a total of USUS$ 113 billion. Outflows increased almost fourfold to reach an all-time high of USUS$ 43 billion, reflecting the strong growth of trans-Latin firms. The upswing in FDI in the region has occurred in a context in which developing countries in general have taken on a greater share in both inward and outward FDI flows. This briefing paper is divided into five sections. The first offers a regional overview of FDI in 2010. The second examines FDI trends in Central America, Panama and the Dominican Republic. The third describes the presence China is beginning to build up as an investor in the region. Lastly, the fourth and fifth sections analyse the main foreign investments and business strategies in the telecommunications and software sectors, respectively