Home » Publications » ECLAC in its historical setting
Available in: EnglishEspañol

ECLAC in its historical setting 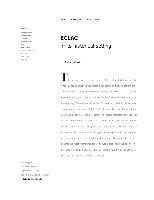 This lecture discusses the features of the colonial situation in LatinAmerica that conditioned the region's economic and social performancein the nineteenth and early twentieth centuries. It deals in particular withArgentina, looking at the events following the First World War through tothe beginning of the Second World War. Those events were formative in theeducation and experience of Raúl Prebisch, who 30 years later would giveECLAC its fundamental characteristics. The lecture examines the ideas thatECLAC contributed to the debate on Latin American development and theevolution of the countries that applied those ideas. It also looks at the externaland internal circumstances that changed the context in which developmentpolicies were implemented from the middle of the 1970s onwards. Lastly, itidentifi es the most recent changes in the world economic situation, and therole of ECLAC in defending the ideas of freedom, well-being and tolerance,which are the essence of modern civilization.

A CEPAL em seu contexto histórico
Economic paradigms and the role of the State in...
Relative prices in Latin America in periods of...
Consensus and dissension among Mexican economists

Structural heterogeneity Economic history of Latin America and the Caribbean