Home » Publications » Foreign Investment in Latin America and the Caribbean 2001
Available in: EnglishEspañol

Foreign Investment in Latin America and the Caribbean 2001 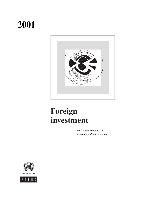 Foreign direct investment (FDI) flows to Latin America and the Caribbean dwindled for the second year in a row in 2001, and preliminary data for 2002 show no signs of a recovery. This trend was observed in both greenfield investment and mergers, acquisitions and privatizations. The investments announced by transnational corporations (TNCs) for the coming years remain concentrated in the service and infrastructure sectors. This indicates that the region has continued to strengthen its links with the incipient networks being established in service provision at the global level. This development contrasts with the Latin American economies' gradual disengagement from international production systems led by TNCs in the manufacturing sector. This combination of trends has been most evident in the South American countries. In addition to providing an overview of current FDI trends in Latin America and the Caribbean, this publication presents in-depth analyses of investment flows to Argentina both before and after the introduction of economic reforms, as a sample analysis of a recipient country; of the European Union as an international investor region; and of the hydrocarbons sector as a branch of activity that clearly illustrates the role of sectoral reform in attracting FDI.