Economic Survey of Latin America and the Caribbean 1999-2000 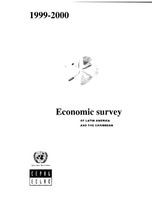 Economic Survey of Latin America and the Caribbean 1999-2000

Foreword The Economic Survey of Latin America and the Caribbean, 1999-2000 is the fifty-second edition in this series and incorporates a number of changes in methodology and format. In addition, a new methodology that was introduced in the preceding edition is being used for the country studies (Parts Two and Three). This methodology is based on national ac counts statistics expressed in the local currency, rather than United States dollars, and uses the base year employed by the relevant country. The chapters on regional issues (Part One) use statistics expressed in dollars and take 1995 as the base year for calculations at constant prices. In order to correct for seasonal variations, the 12-month rate of inflation has been used, rather than annualized monthly rates, in computing the real interest rates shown in table 2 of the country studies. The modifications that were introduced in 1995 in the Survey's coverage of regional economic conditions have been maintained in this edition. Once again, the Survey has been published in a single volume consisting of three parts. Part One presents an overview of the regional economy in 1999 and the first half of 2000. This summary has also been published as a separate document. The other six chapters in Part One review the region's economic performance in 1999, as well as drawing upon data for the first half of 2000. The eighth chapter assesses the impact of economic reforms in terms of growth, employment and social equity in Latin America and the Caribbean during the past decade. Part Two presents reports on the performance of the 20 countries of Latin America during 1999 and i ncludes information on the early months of the year 2000. Part Three is devoted to an analysis of the economic situati on in the countries of the English-speaking Caribbean.